Not to be outdone by a beer-loving Chihuahua or Great Pyrenees barflies, this hoppy I mean happy pup was hanging out near the Wisconsin Brewing Company offices. Since he was already black and white I thought grayscale would suit him. No, not the Game of Throne's Stone Men one, I wouldn't wish that on a dog.

It's really too hot for anything. The stifling weather doesn't seem to be helping anyone's driving skills and I'd kneel in protest if it weren't so hard to get back up.
Who was the one Steeler who stood outside the tunnel for the national anthem today—Alejandro Villanueva. Can you tell I'm writing this while watching football? I'm all for freedom of speech but must applaud someone willing to literally stand for what they believe in while everyone else is kneeling or sitting in sweet AC.
It wouldn't be the only time today the Steelers were in the locker room instead of on the field. Enough about politics and football which are one and the same today except to remind everyone that the Bears still suck.
And let me add that if you're foolhardy enough to wear a Bears jersey in Wisconsin the only acceptable number is 34. I'm talking to you, Bears jersey wearing waiter dude who forgot our menus, napkins, silverware and soup at the RodeSide Grill today. Why are you wearing a backup QB jersey anyway? 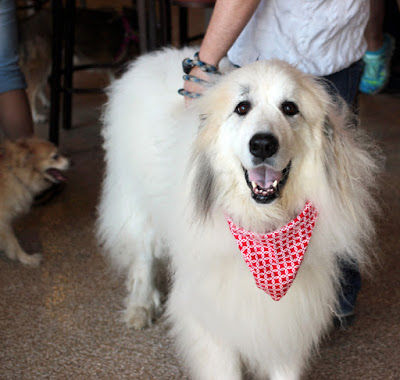 I'm not sure when Dogtober moved to Puptember but there were three canine fall fests last Sunday and we were beside ourselves.
It was tough to choose but I picked the one closest to New Glarus, one of my favorite places for festivals, bratwurst and fiberglass cows.
It turned out to be a great choice because not only did I get a close up look at Christian Rock fans waving their hands in the air like they just didn't careah—or careahed a lot, including a lady who had fallen backward off a picnic table bench—but there were free brats. FREE brats so I was in heaven (no pun intended). The gray-haired Christian rock fan was looked after and fine, waving about like an inflatable air dancer when we left.
Back to Puptember.
There were two Great Pyranese hanging out in the Wisconsin Brewing Company tap room and this pup was one of the most earnest dogs I've ever met. He had the grace of a white Bengal tiger with the welcoming manner of an employee at the Lake Mills Dollar General. High praise as I've become a dollar store connoisseur thanks to my mother.
There were dogs in costume, the best cream soda ever, music and a gift shop for my cousin to buy "growlers." Fitting don't you think? I didn't see any growlers or prowlers but plenty of jowlers and one or two howlers.
Here's hoping you like photos of canine cosplayers because I'll be posting a lot of them as well as pups going au naturel. 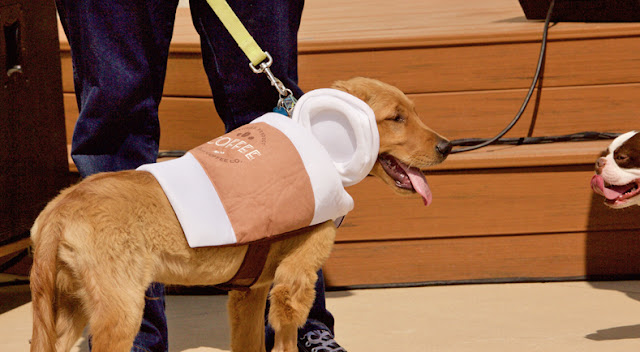 Have a cup of coffee.


And enjoy the only Halloween dog song I could think of. (Because the dog is named, "Boo!")

How Many More Times

Will I embarrass my little cousin? At least once more. Look at him, isn't he cute?


Bug Boy got a scholarship to play ball at a small college out of state where he did well. But it was his dream to play for the University of Wisconsin Badgers so he came back home. His parents had since moved and he hadn't gotten accepted to the university but took a shot.


That meant tech school, getting his grades up, working and going to school and what seemed like endless attempts to get a try out with the Badgers.

He got into the UW but they wouldn't let him try out. Semesters and football seasons passed and it seemed time to chalk it up to character building—being quite the character already he didn't really need it.


Out of the blue last week they said he was on the team. That doesn't mean he gets to play, and I counted 13 WRs on the roster, but hell, our little Bug Boy is one tenacious kid and today he got to suit up. I'm all verklempt.
This young man, forever a little boy in my eyes no offense, is a sweet reminder that we should not give up and even if we go down, to go down swinging. Preferably in the Duke Ellington sense, but you know, Rocky if you prefer.

Zeppelin may not be the obvious choice but Bug, his brother Vince and I had a car radio rule, we take turns selecting music unless Zeppelin comes on and then: We never turn off Zeppelin.

I'm can barely wait for the luscious fall weather, but it won't come next week since we're expecting weather in the 80s. It would be criminal to complain so I'll content myself with a few premature fall photos from this week.

We Got To Move These Refrigerators

Fully stocked refrigerators, complete with ginger kitties this week only. I hadn't noticed what a hillbilly fridge I had until I took this shot of Dexter checking off another item from his Not Supposed To Do list. 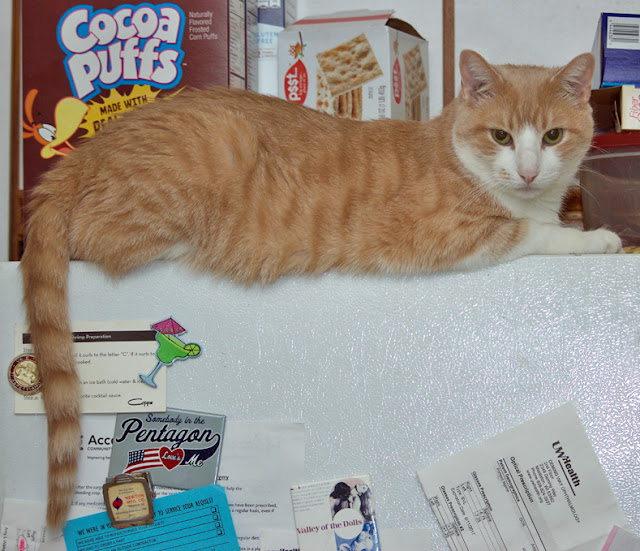 Looking For Corn In All The Wrong Places

I went on an *epic journey to find end of season sweet corn and although disappointing on the cob, it was okay stripped down and should be mighty tasty come winter.
Skelly's Market outside of Janesville was just starting to get their maze and pumpkin patch ready for some good clean outdoor weekend family fun, but they had crisp sour apples bagged and ready for sampling. My favorite though was all the autumn tchotches they had on display.
Funny how such a colorful season looks so rich in black and white.


*Lost again and I wasn't even driving

Don't Bale On Me Now

I saw this golden opportunity on the way to one of the many festivals I visited this summer. A gleaming example of the approaching fall and of the summer I'm trying to preserve.