Someone has been extra peppy lately and hours of play hasn't been cutting it. Maybe getting a solid 19 hours has something to do with it.

It was pushing 60˚ today but is supposed to snow again Thursday. I went to check the condition of one of my favorite bike trails (closed) and the town swimming around it (drying out). 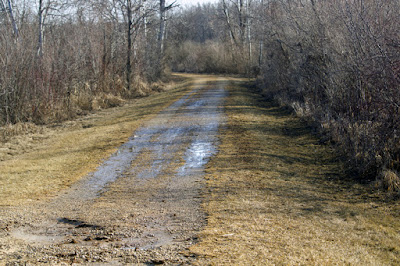 Then I really slowed down to take a look at things while remembering that no matter how serene a day you're having some dangerous idiot could be just around the corner.

But a few other things caught my eye and I continued to bask in mother nature's bipolar high.

My mother didn't feel like going out today so we sat around and snacked and gossiped while I played with my new pocket camera. I've had no luck taking photos lately and was complaining that the harsh light coming from her porch would ruin the shot. Turns out this is the only photo from today's batch I liked.

It's been an interesting month for weather and I'm looking forward to a calmer week. I'm itching to take more photos with the about where I should be Canon 7D Mark II and has yet to impress me but let's give it a chance Lumix TS30K Tough camera.

Honey, Did You Leave The Hose On?

Last Sunday things were melting here while towns were flooding nearby. A crazy five days of rain, melt, freeze and more melting followed.
I didn't make it to my favorite little village which was saturated by the Sugar River at the beginning of the week and I'm now picturing encased in ice ala Frozen.
A county cop stopped me on my way there yesterday so I took some photos and called it a day. But I am curious to see what happens to a place once it's flooded then frozen. Maybe I'll go tomorrow and take a different route.

I don't know exactly when my cousin started letting me take care of Dexter, but according to this post, it was around July 22, 2016. 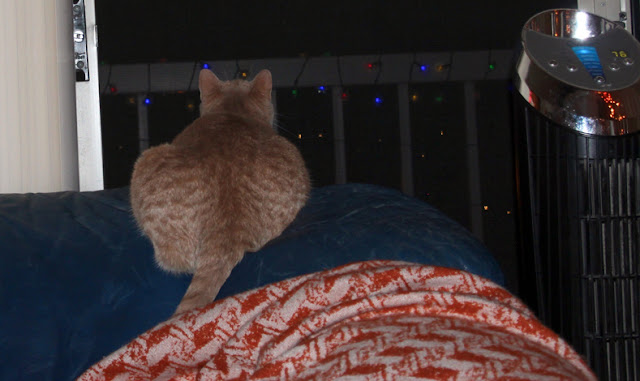 This is the earliest photo I can find of him, but there have been so many more. He doesn't like it when I take a picture of his big ol' butt.

I got a new tough point-and-shoot yesterday and decided to bring it with me everywhere. Yes, everywhere, which I'm sure Dex is thrilled about. 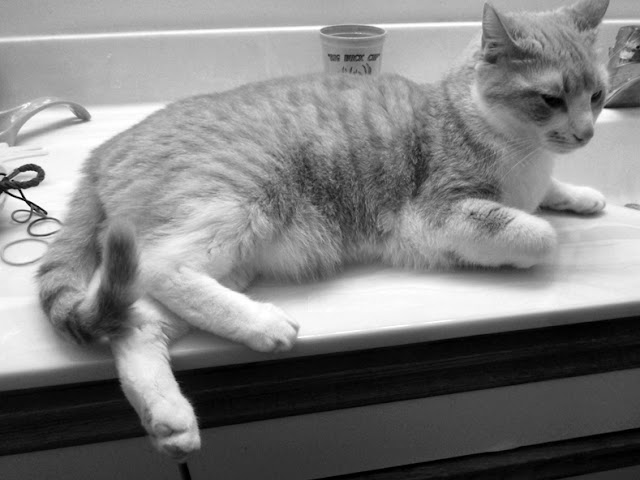 I'm not sure when he began regarding the bathroom as his den and even less sure it's a good thing.

The Other Side of The Coin

Or is that corn, we didn't know. Hard to believe this photo was taken the same day a few miles away from the last post. I had to look for spots that weren't going through a meltdown, but what we noticed most were flags at half mast.
Lots of water everywhere here today, but nothing like one of my favorite little towns, Monticello, which flooded over.

What A Way To Go (To Talk About This Photo)

My parents took my sister and me to a movie called, What A Way To Go when we were kids which apparently offended my mother because she said, "Clarence, this is not appropriate for children."
Shirley MacLaine kept marrying the likes of Dean Martin, Dick Van Dyke and Gene Kelly, all of whom I adored, and save for I think Paul Newman's character, met 60s madcap comedy deaths. I remember her husband Pinky (Gene Kelly) going nuts over the color pink and eventually being painted to death. I found it both haunting and kind of pretty, like yesterday's sunset.
And you wondered how I'd bring it around.

A little sunshine can keep a lot of people very happy for a long time and this photo from across the pond—ha— reminds me how little it takes.
Dogs were walking, people were playing broomball, skaters were whisking around long ovals and my good lens went wonky. But this shot was enough to remind me of sunshine, crisp snow and red cheeks.
No, not those cheeks (but maybe). 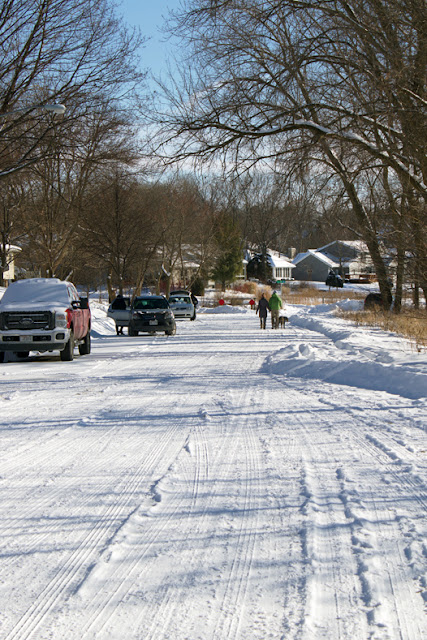 —From A Little Sunshine by Sunshine Anderson

One of the upsides of having a cat is that they don't seem to care about anything. Dexter has his schedule like my dog pals, but his needs are few and frolicking on a frozen beach during a snowstorm isn't one of them.
My dog buds would give their last plush toy to dive into the snow blanketing this beach. 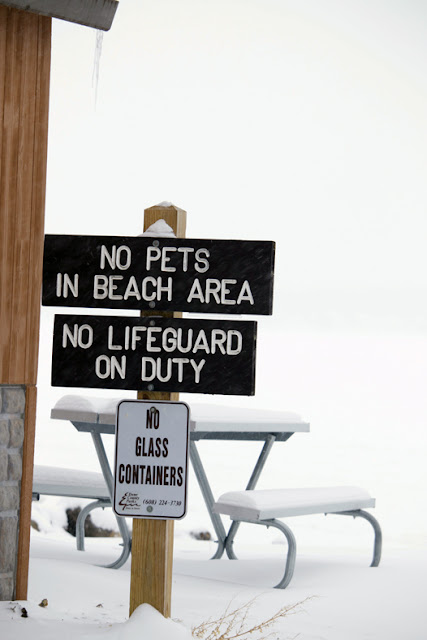 Dexter could give a flying flake.

There were some interesting tracks next to the ice rink on Stricker's pond. I wondered where they led. 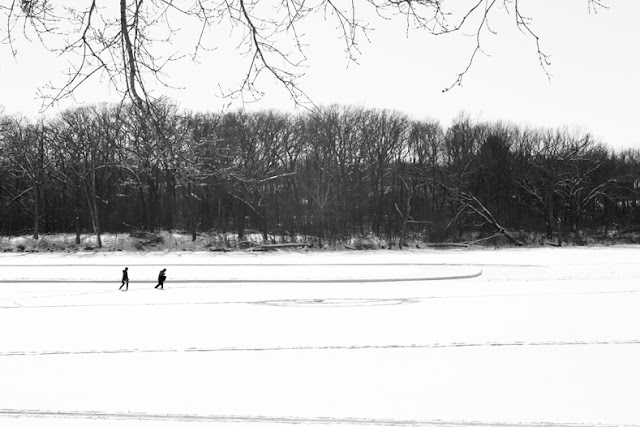 Wait, is that a pyramid? 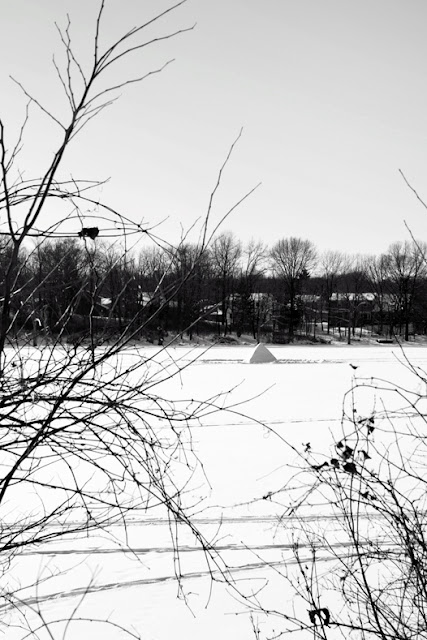 I got a Turbo Scratcher refill for Dexter's Mardi Gras present which I guessed he wanted more than beads. He acted as if he's never gotten a new toy or scratcher before and even enjoyed the nip that came with it. He's normally not a nip guy so it must have been good stuff.
Doesn't he look a little too fascinated with the turbo balls? 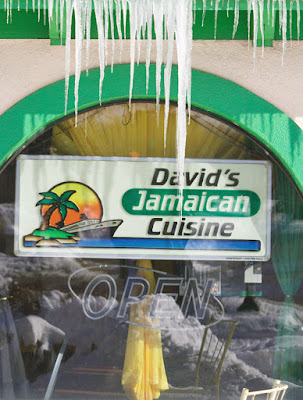 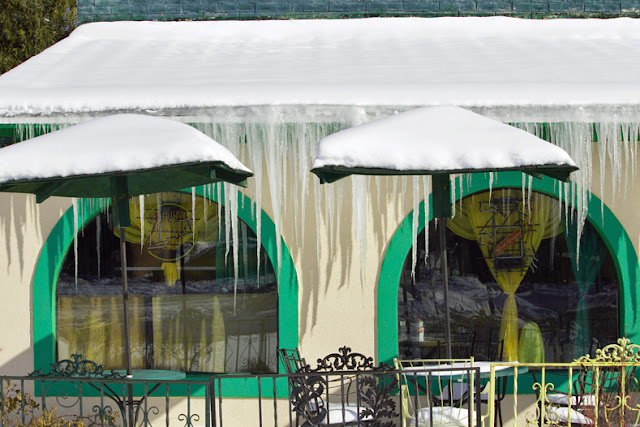 This Little Tikes Cozy Coupe reminded me of my daredevil cousin who was always building ramps and riding anything on wheels over it. I wonder how far the rider of this Cozy Coupe got without snow tires. (This far). I hope they wore boots. 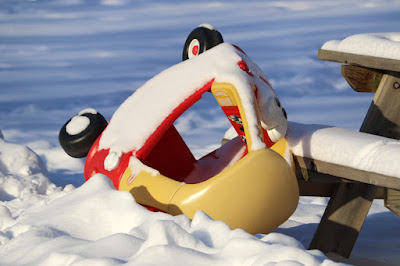 And Put Up A Parking Lot

The snow and bright sky were doing something interesting to the Westport tree sculpture yesterday. It became an even more fascinating tree after it was killed then turned into a sculpture in 1998. Artist Alberto Chavez carved out a tale from the old oak which features a woman, an eagle, a man, a bear, a snake and some otters. I can pick out the woman and eagle in this shot but I'm not 100 percent on the bear.
I think of this artwork as a living thing that makes my life more interesting than it is. Here's a little history from an earlier post.

We love Bill Bixby and think Ed Norton and Mark Ruffalo are okay too. We do not love our new diet.
An accidental overdose of gamma radiation didn't alter Dexter's body chemistry but I think he could use a snack.

I thought when Aaron Rodgers broke his collarbone in the first quarter of that Viking game in mid-October it was some kind of karmic payment for a relatively snowless and mild winter. Except for a few eyeball freezing days here and there, it's been one of the more *pleasant winters on record.
However we're looking forward to the "snowiest week of the winter" just as Rodgers is healing up nicely in the Pebble Beach sun with Danica Partick. I find it suspicious is all.

I Just Wanted A Diet Coke

Yesterday was Ice Cream For Breakfast Day.  My first question is, "Why?" followed by, "Who gets to make these things official?" A short and lazy search for answers came up with a family in upstate New York who created it between winter holidays. Their kids spread the word in college and word of mouth put it on the calendar.
If all you have to do is get tired of winter and tell your college friends something weird about your parents involving ice cream then I submit My Dad Is Hiding The Good Ice Cream Under The Gross Ice Cream Which Makes No Sense Because Why Even Get That Kind In The First Place Day.


We went to the Chocolate Shoppe which used to be the Chocolate House which is where my dad had ice cream baristas fill gallons of covert layers. Unfortunately I couldn't stomach any of the creations I'd been planning on such as Lucky Charms in banana ice cream or Caramel Apple Pie with Cinnamon Toast Crunch crumbles. When I asked for caffeine I was pointed to a caffeinated espresso ice cream with fudge swirls and chocolate. I meant do you have a Diet Coke.


It was too early for anything except wake up soda and a bit of toast as I'm not an early riser and usually can't eat breakfast until it's close to lunch. But my cousin Nanci was up for anything. She's one of my favorite go-to taste testers and has eaten worse than this for the sake of a post.


People were feasting on Greenbush Bakery donut ice cream sandwiches and freshly made waffles topped with many imaginative and disgusting things, some in pajamas, some not.


A UW student most likely armed with freshly acquired knowledge and a shiny new sense of self-importance objected to my taking a picture of the food on her table. I was going to trash it when she said, "I'm going to stand here while you delete it." The way she said it set my teeth on edge so I went against my policy of request and delete. It's a pretty crummy photo and the young lady in profile seemed as thrilled to be in the middle of her friend's drama as the kid eating breakfast ice cream with her parents.


When I walked over to her friends and showed them the photo I got the feeling they'd been through this before. The drama queen was going to show me proof I was acting illegally—which I was looking forward to—but couldn't come up with anything so threatened to "call someone." We lingered a bit to see if "someone" would show but she strutted off down State Street in search of a new 15-minute cause, blowing me a kiss through the window.


Although the Chocolate Shoppe was promoting this as a media event and encouraged posting photos to Facebook and Instagram it helps to know some of the basic laws of street photography (I found #6 especially helpful).
What experiences have you had when taking photos of people, I'd love to hear about them in the comments or email.

What The Cat Saw

We haven't had much snow and people were happy we got some today.
Quick Tip: It helps to clean off your car windows if you want to see. (Someone backed into my car in a parking lot as I was waiting for an elderly gentleman to back out in front of me. The guy's excuse, "I didn't think to look.")
Shortly after that I almost ran into a speeding ATV which was racing down a county park driveway onto the ice. I won't even talk about breakfast at the ice cream shop.
So tonight we're content to look out the window and listen to one of our favorite radio shows. 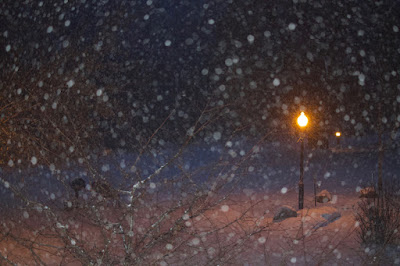 I know someone who lived on the ice one winter behind the Memorial Union in the '80s. This isn't him.

From When I Had More Energy To Walk Down Trails

This photo from Buckhorn State Park is from my first non-disposable digital camera, a slow and clunky point-and-shoot from 2003. It took compact flash cards which have been storing forgotten photos.
There are eight trails at Buckhorn State Park, this might be the Central Sands Nature Trail. I remember shooting something sandy somewhere at some point. Do they make memory cards for people? 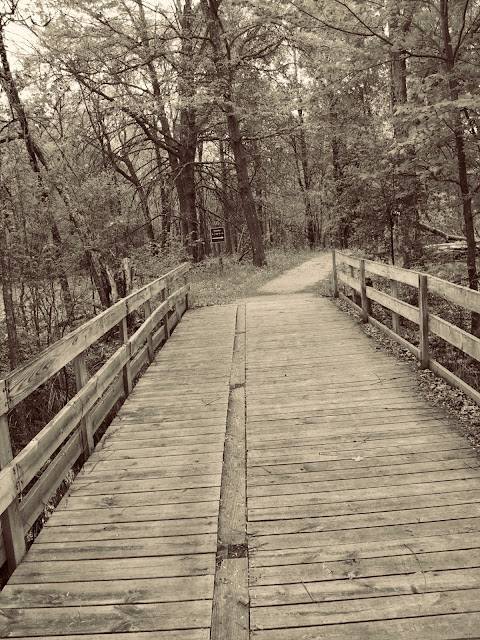